Our dog, Zip, has been full of challenges.   Most of them come from his previous life as a puppy companion to an older woman.   He ended up in the shelter when the woman could no longer stay in her home and family could not keep her dear pets. 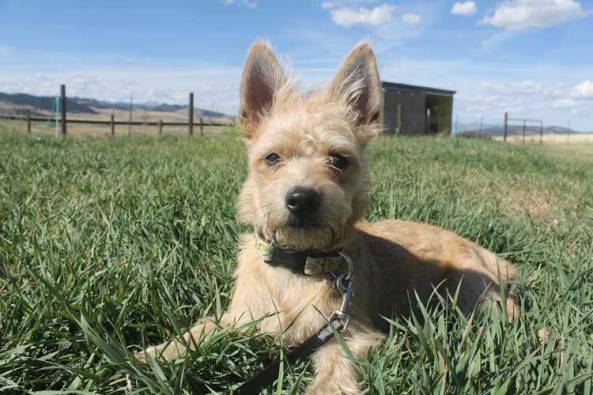 Zip loves laying in the lush grass over the septic field.

Read between the lines, and you know what things Zip never learned.   Zip’s main purpose in life was to sit on her owner’s lap and be the center of her world.   We suspect his owner wasn’t very mobile  and because of that  he wasn’t house trained until he learned it here. He had never experienced grass before us. To this day he likes to walk and lay in lush Iowa green grass and hates prickly cured Montana dry grasses.   He isn’t crazy about snow and absolutely hates rain.   He can hold it for hours rather than go outside in even a light drizzle.   We have learned that we just pick him up and carry him out to a spot because he likely will never choose to go outside instead he will explode.  He will go on walks, but he is the first dog  that we have had that is not passionate about them.  He is not a dog who loves to train with me or gets me out when I don’t want to go.   We don’t tell him this out loud, but we think he is a pansy dog. 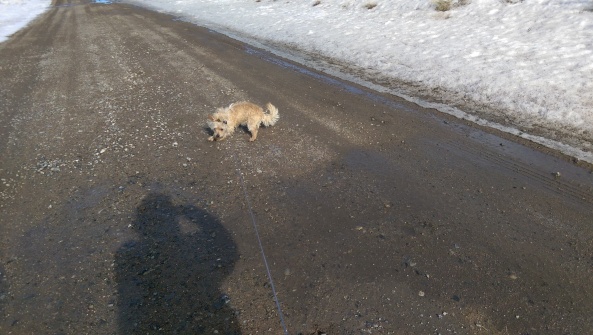 He hates walking through even a little water on the road.

Today he fooled us.   His terrier instinct kicked in and he was on the hunt for some ground burrowing animal that has turned up in our yard.   We have not see what is making all these holes, but Zip was out there in the hottest sun of the day digging for all he was worth.  He was dirty from digging with his front feet and tossing with his rear feet.  His feet were digging through not only soil but also rocks and roots.  Some how I imagine that was harder on his feet than the dry grass.    His head was down in the hole, snorting in a highly unimaginable fashion before today.   His nose was mud caked from sniffing out his imagined prey.  It was fun to see him having fun doing something outside. 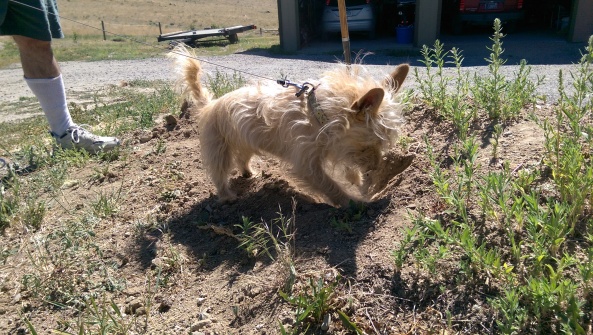 So we now ask ourselves nature or nurture?   When does it kick in? 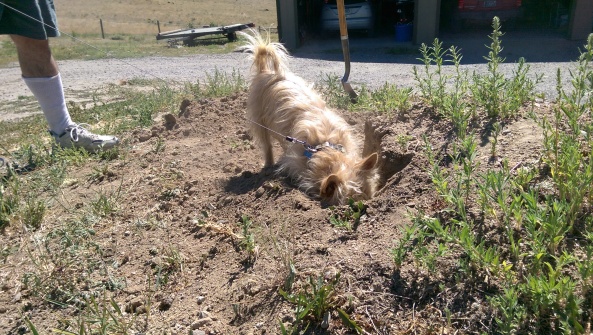 It was fun to see him enjoying himself doing something so dog. 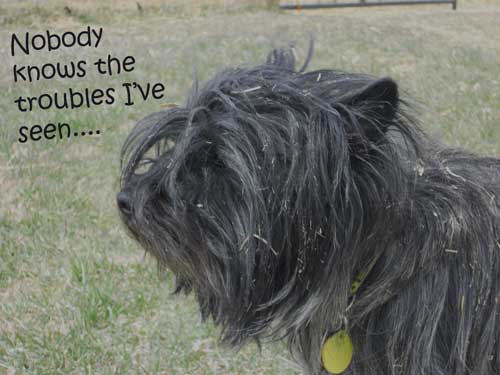 Our dog, Harley, found himself at age 5 or 6 at a shelter, no longer wanted by his owners.   The prior owners told the shelter one story and we have since found out he had more difficult life than shared with the shelter.  That does not surprise us, who would expect someone who gives up their pets to tell the whole or real story.

It took awhile but we soon came to realized that our dog was not so sure of men, and men with work boots could send him over the edge.   The first-time we saw this he grabbed ahold of a man’s shoe and held on for dear life.   It was almost comical a 15-pound dog on a big old work boot.  The guy shook his foot and my little dog was sort of like a little piece of toilet paper stuck to his shoe.   He was not big enough fortunately to do any damage but it was a window on things yet to come.   We have come to the conclusion doesn’t like boots; work boots, snow boots, hiking boots, and will gladly attack the wearer of any of those.   Not the person, but the boot.    This summer he was in a room where a friend was walking around with sandals and out of nowhere he darted in snapped at the footwear and was gone in a second.   Another not so wonderful first.    Add leather sandals to the list of “wrong footwear.”

My friend coined a term that day that I think sums it all up a doggie flashback.   We think our dog was likely kicked in his previous life.   Most likely by a man in some kind of leather style boots, as tennis shoes have yet to spark any reaction from him.     He appears to want to strike first.  It is that survival instinct of fight or flight that kicks in when he sees that leather boot.   Little moron, doesn’t he realize that this could get him in trouble.   A less patient or perceptive family could send him directly back to the shelter.

Instead we have dedicated ourselves to desensitizing him.  We repeatedly set him up for failure and work on instilling better behaviors in him.   This is not easy, but we are slowly making progress.  We leave boots out all over the place rather than put them away where they belong.   Fortunately we have a whole collection to do this with, several pairs of hikers, riding, work boots, and anything else heavy and leather works for us.   He no long walks great distances around these empty boots.  He has learned empty boots will not get him.     We have taken up working  with friends and neighbors who wear boots.   When they stop by our place, we have a routine.   Harley has to sit and stay  in place and once that urge passes rewarding him for getting past that fight or flight behavior.     It is a challenge if he gets a jump on us and starts to challenge the boots first, and we have to get his attention to sit-stay, but we are not giving up.     My neighbor the other day complemented him on how far he had come.   That is nice to hear, but we know he still has a long ways to go in the fear that his doggie flashback causes.

I doubt we are going to ever get to the place where he won’t have a flashback now and then, but as his owners we are working hard to minimize them.   He is a good little companion, and like me he isn’t perfect.   I still need to work with him each day so he knows that we will keep him safe.   Some baggage we never get over in life, here is hoping that some day my dog will stop having flashbacks and have faith I will keep him safe.

When did I last blog?

Other Ways to Stay Connected

What have I written about?

Are you looking for something special?

Find a single thread of blogs