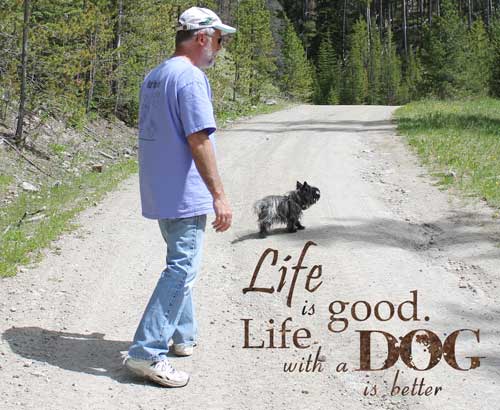 We went out exploring and I captured this snapshot of the men in my life.  It captures how in tandem they can be . As we were walking down the country road, they both heard something that made them stop, look and listen.   This is remarkable because we did not raise him from a puppy, but got him when he was five-years old from a shelter as someone’s cast off pet.  In the three years we have had him, he has become ours.

For me he is a constant companion.  Working from home he spends  hours with me.   His days are spent in the office, lounging around not asking for much, but always there.     He is my walking and hiking partner, be it paved road or forest trail he is always ready and a tireless companion.   Lastly I have discovered he is also my protector.   When the man of the house is gone, he sleeps not with me, or in his kennel as he usually does,  but watching out the window, providing notice when someone arrives friend or foe.

For Mr. Ranger Sir Harley is the calming and diffusing element for the stress that his life brings.   When Mr. Ranger Sir gets home from work Harley knows the fun half of the family is in the house.   He gets himself all wound up, barking and twirling in circles as terriers are suppose to do,  because it is time for  play.   I am not sure if Harley does that because he needs some activity or he senses his man needs to unwind and a mental diversion from all that has happened in a hard day at work.   The are inseparable when they are both home.   They bring out the best and worst in one another and only boys can do.

Harley is by no means a perfect pet or dog.   He is a Cairn Terrier and has a bit of a terrier attitude at times, and does things on his own schedule, his own way.   He may be a small dog, but by no means a lap dog.   Don’t think you will lower your blood pressure by petting  him as he sits on your lap.   He’d rather lay on the floor.  After we had him about two years he decided he’d like to chase the few cars and trucks that come down the road ; luckily it is a dead end.   Lastly he came with mental baggage and dislikes others fees and hates men’s workboots.   No amount of consistent behavior modification work as stopped or changed any of that.

When did I last blog?

Other Ways to Stay Connected

What have I written about?

Are you looking for something special?

Find a single thread of blogs